After a two year break from public speaking, religious persecution survivor, Mariam Ibraheem, accepted an invitation to speak at Coptic Solidarity’s 10th Annual Conference in Washington, D.C. this week. Motivated by a desire to encourage and rescue others who have been falsely accused or imprisoned because of their beliefs, Mariam was honored to share her personal testimony and speak on behalf of those who have been silenced because of their faith. Having survived being pregnant on death row with little chance of survival, Mariam stated that she now signs her emails, “Fear not tomorrow, God is is already there.”

Here is a transcript of her speech:

Before I begin I want to thank you for giving me this opportunity to share my story. In doing this I hope to speak for the millions of men and women whose voices have been silenced by religious oppression across the world. I am sincerely grateful to you, for all efforts on behalf of these victims of persecution. It is my hope that my story will, with many others, shine a light on these millions who are suffering and dying for their faith around the world.

I was born in a refugee camp in the town of Gedarif in eastern Sudan. My mother, a Christian, escaped from the war in Ethiopia when she was 10 years old. She had lost her entire family through death or displacement and found, like many others, the temporary safety of a refugee camp. It was here she met my father, a Muslim, who was a bus driver in the camp. They married when she was 16-years-old, but sadly within a few years she found herself raising my sister, brother, and me alone. Despite the efforts of her Muslim husband, she held tightly to her faith in Christ.

My younger sister became seriously ill and we left the refugee camp for the small, predominately Muslim city of Gedarif in hopes of a better life and escaping the diseases that always plagued the camp.  I had trouble adjusting to life in a predominately Muslim city, but my mother and church elders told me I must respect their rules, such as head covering, if we were to live there in peace. My mother was faithful and always reminding us to remain close to God and trust Him. She prayed over us every day and encouraged us to spend our time at church and make our friends there. I mention all this just to say, that like many others, I owe so much to the Godly example of my mother. Years later, while I was living in Khartoum and working with the nuns of the Little Sisters of the Poor, both she and my sister died within a week of each other. It was a very hard time for me.

But God is gracious, and five months later, I graduated from school and married the Christian man that I had become engaged to. I was excited about my new life:  I was married and going to have a baby. I wanted to build a new life for my family that didn’t include all the hardships I had faced. My life was simple and peaceful: taking care of my young family, working and volunteering at church.

A few months later however, my world turned upside down with a phone call from the police. They told my husband and I to come down to the station. When we arrived the officer told me that my family was searching for me, and they wanted to take me.  I was holding my son in my arms as I told him I already had my own family. I asked the officer why “my family” would come to the police instead of my home to find me? He didn’t have an answer. After lengthy questioning he finally let us go home.

Later, we were again called to the police station, but this time they put us both in jail and charged us with adultery. The people claiming to be my family said that I was a Muslim and I couldn’t marry a Christian man. Under Sharia law, children must follow their father’s religion, so I must be a Muslim like my father. My husband, my infant son and I spent the day in jail.

In the middle of the night we were released on bail with a court date in two weeks.  The trial was to determine my religion and it lasted from September until December 2013. I told the court that I was a Christian and not a Muslim, but at the end of all the hearings, they put me in jail on Christmas Eve in 2013 and charged me with apostasy and adultery.  I remember clearly the day before we went to the courthouse. We made Christmas cookies, and we bought new clothes and gifts for everyone.

At the prison, a doctor did many tests, including a pregnancy test, and it was discovered that I was pregnant. I was shocked because I was not planning to have another baby at that time, but of course God had something else planned.  It has been said that when God wants to do a new thing, a baby is born. Throughout the Bible babies such as Moses, Samuel, and eventually Jesus marked the beginning of deliverance for God’s people, and this was case for my beautiful daughter, Maya, who was growing in my womb.  My pregnancy with Maya delayed my death sentence which helped save my life.

I was sentenced to death by hanging for apostasy and to 100 lashes for adultery, and the judge also cancelled my marriage. However, because I was pregnant the judge said I would be allowed to have the baby and then have two years to nurse him before they give me the 100 lashes and executed me. God is always in control.  I never planned to be pregnant at that time, but my daughter Maya was his rescue plan.  God works things out for good. This is why I now sign my emails, “Fear not tomorrow, God is already there.”

I was jailed in a Federal Women’s prison with heavy chains on my feet. My son, Martin, was in the prison cell with me just learning to walk and trying to run around. I saw horrible things in that prison. Every day 1 or 2 children died. There was no clean water, and sometimes there was no water at all. The food was terrible. Prisoners slept on the floor and were harassed by mosquitoes. They treated me differently because they were trying to convert me to Islam.  Every day a new Muslim Imam came to speak with me about Islam and read the Quran over me. I would not convert to Islam, so they took me to the doctor to test me for a mental illness. Three specialists at the hospital talked with me and all said I was fine and that I didn’t have any illness.  My strong mental health surprised one of the specialists, so he asked to visit my church.   I encouraged the doctors to read the Bible so they could understand why I was so strong in spirit.

While in prison, I was always praying and talking to God. I knew he was always with me. He never left me, and he kept his promises to me. On my first day in jail I cried all night, and I didn’t sleep. When I closed my eyes and prayed, I felt there was someone there and He put his hands on my head and said, “You are not alone.” I opened my eyes and said, “Who you are?” But no one was there. There were only two other women in my cell, and they laughed at me and told the officer I was talking to myself.

While in prison I used the links on my chains on my ankles to pray the Rosary.  The prison guard became angry with me because the metal on the chains was miraculously worn so thin that they almost broke.  The guard thought I must be filing down the chains. I knew though that God used the prayers of many people, including many of you here today, to wear through the chains.  God used your prayers to set us free.

My daughter, Maya, was born on May 27, 2014 in a Sudanese prison cell. Because I was chained and could not move freely I was concerned that she might have been injured in the birth and would not be able to walk, but as you can see she is now five years old, healthy, and full of life (show photos of kids).  There were plans for my children to be put into an orphanage after my execution, but God had other plans.  Shortly after Maya’s birth the Vatican and Italian Embassy was miraculously able to negotiate my release for asylum to Italy.  Eventually, I moved from Europe back to the U.S. where my husband and his family lived.

This experience was very painful, but my heart was always at peace no matter what the judge said or the prison guards did. I never asked why this happened to me. I always said, “Thank you Lord for choosing me to do this. I am so grateful to be blessed by this because you said, ‘Blessed are ye, when men shall revile you, and persecuted you, and shall say all manner of evil against you falsely, for my sake, Rejoice and be glad; for great is your reward in heaven, for so persecuted they the prophets which were before you.’”

Like Esther in the Bible I have been given this opportunity for a purpose – to bring hope and courage to those who are oppressed and feel like they are suffering alone.  It is my hope that these words will not die here but will lead to positive change and support from America and all freedom-loving people.

Mariam was also honored to be one of three recipients of the Hero of Faith Award. Other honorees were religious persecution survivors Pastor Andrew Brunson who was held captive for over a year in Turkey, and Asia Bibi who spent eight years on death row in Pakistan. 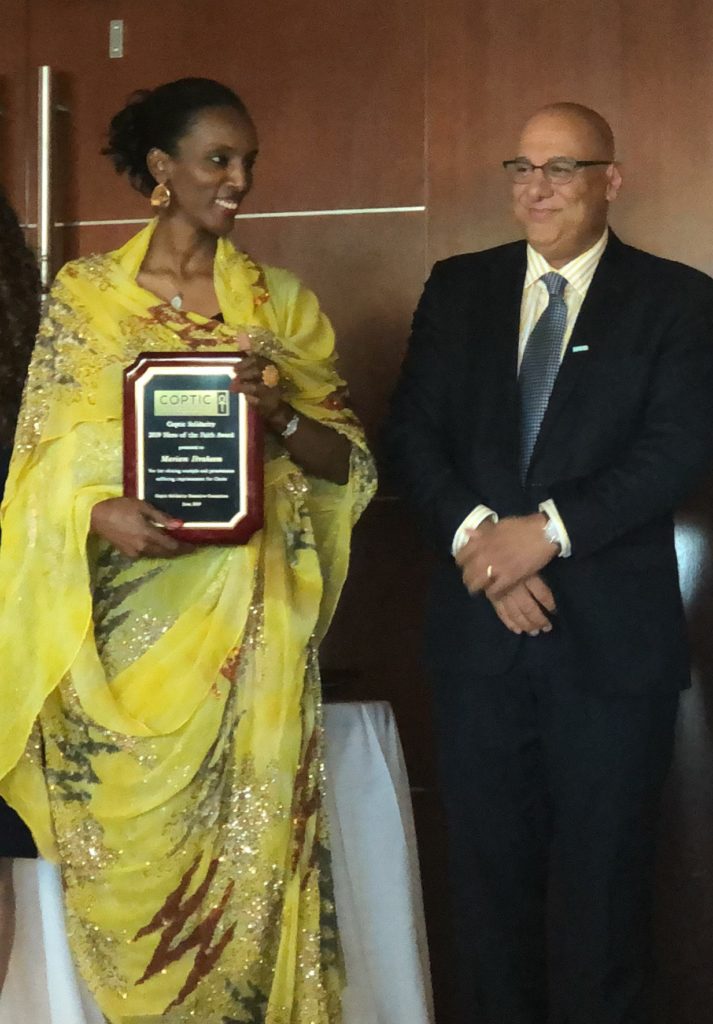 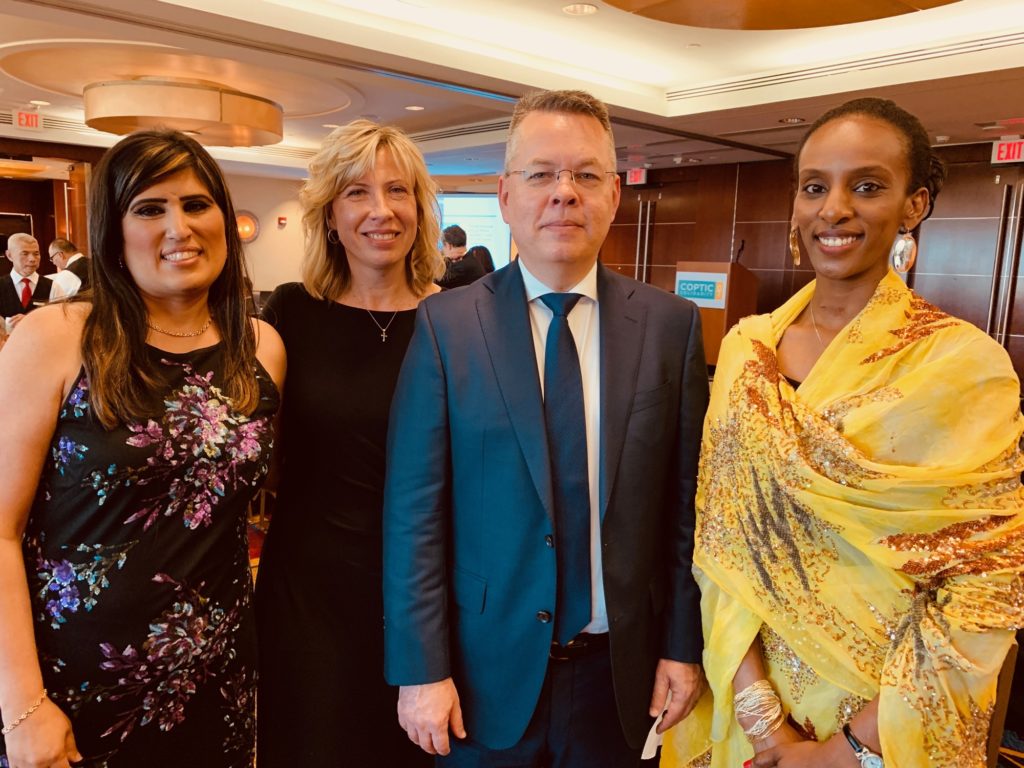 Naghmeh and Mariam with Pastor Andrew Brunson and his wife Norine