This week Mariam Ibraheem and Anne Basham were invited to attend the 2nd Ministerial to Advance Religious Freedom at the U.S. State Department in Washington, D.C. Mariam was one of 23 survivors of religious persecution who was asked to share her story at the event. 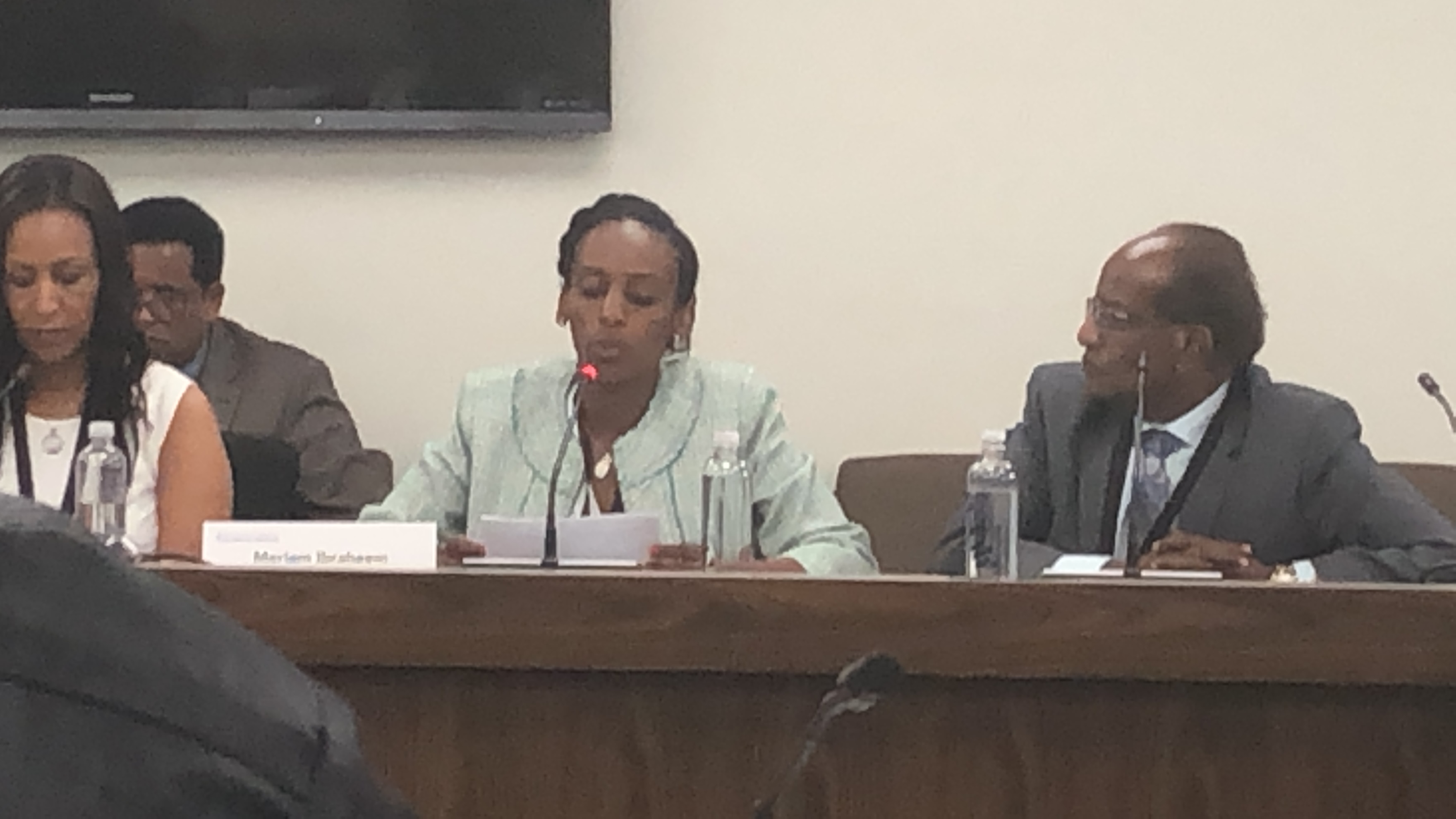 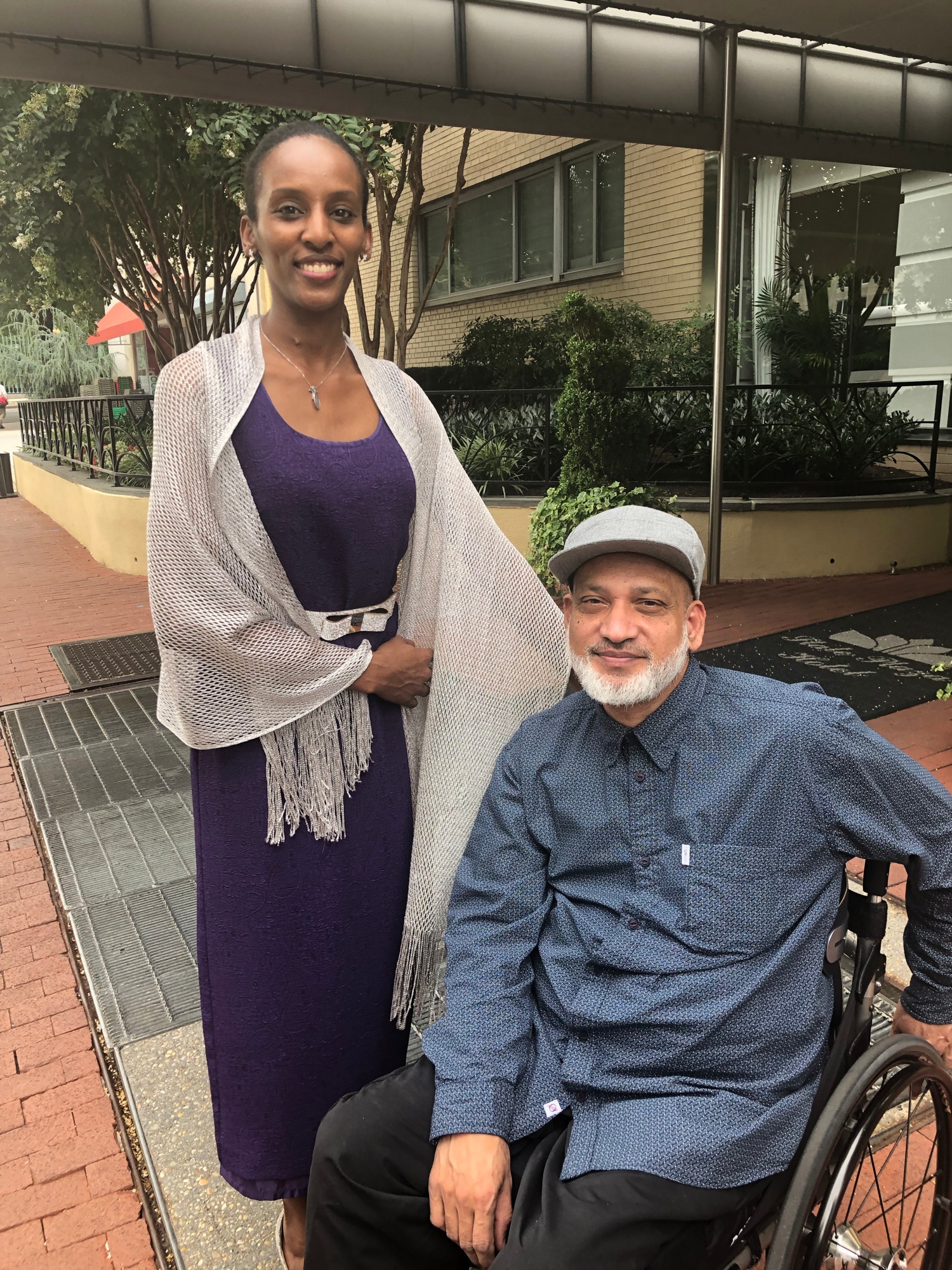 The  Ministerial was the largest human rights event ever held by the U.S. State Department and the largest religious freedom event in the world of this kind. More than 1,000 civil society and religious leaders and more than 100 foreign delegations were invited to listen and discuss ways to combat religious persecution and discrimination.

One of the unique features of this year’s Ministerial was the extra time allotted for attendees to connect with each other outside of breakout sessions. People from various organizations and religious groups all over the world were given the opportunity to collaborate and build relationships with those they might never have known otherwise. Mariam Ibraheem and Anne Basham had dozens of meaningful conversations, and the photos below represent just a few of the highlights. TAF is grateful for the efforts of the U.S. State Department and the priority the U.S. has placed on religious freedom for all.

Here is a transcript of Mariam’s speech at the Ministerial:

Thank you for this opportunity to share my story. Today I am speaking on behalf of the millions of men and women whose voices have been silenced by religious oppression across the world. I am sincerely grateful for your efforts on behalf of these victims of persecution. In 2013 I was a young wife and mother in Sudan when my world turned upside down with a phone call from the police. I was raised with a Christian faith all my life by my mother in Sudan, but under Sharia law children must follow their father’s religion, so I was considered a Muslim like my father. I went through a trial during the fall of 2013, but on Christmas Eve I was charged with apostasy and adultery for marrying a Christian man under the Public Law Order. I was sentenced to death by hanging for apostasy and to 100 lashes for adultery. The judge also cancelled my marriage.

The day I was transferred to prison it was discovered that I was pregnant. I was not planning to have another baby at that time, but God had something else planned. It has been said that when God wants to do something new a baby is born. In the Bible babies such as Joseph, Moses, Samuel, and Jesus brought deliverance for God’s people, and this was true of my daughter, Maya, who was growing in my womb. My pregnancy with Maya delayed my death sentence which helped save my life.  Because I was pregnant the judge agreed to allow me to deliver the baby and nurse her for two years before carrying out my death sentence.  God works things all things for good. This is why I sign my emails, “Fear not tomorrow, God is already there.”

I was jailed in a Federal Women’s Prison with heavy chains on my feet. My son, Martin, was only 9 months old when he entered the prison cell with me and was learning to walk and run around. Every day 1 or 2 children died in prison. There was no clean water, and sometimes no water at all. The food was terrible. Prisoners slept on the floor and were harassed by mosquitos. While in prison I prayed constantly. I used the links on my chains to pray the Rosary. One morning I woke up and for no known reason my chains were suddenly thin. The prison guard became angry because she thought I was filing down the chains. I believe that God was using the prayers of many people, including many of you here today, to wear through my chains. Prayer breaks chains, and no one can take away your freedom to pray and worship.

My daughter, Maya, was born on May 27, 2014 in a Sudanese prison cell. Ambassador John Bolton said that she was the youngest U.S. citizen ever born in prison. Because I was chained and could not move freely I was concerned that she might have been injured at birth and unable to walk, but she is now five years old, healthy, and full of life. There were plans for my children to be sent to an orphanage after my execution, but God had other plans. The United States and many other nations, organizations, and people of influence advocated publicly for my release. Shortly after Maya’s birth the Vatican and Italian Embassy were able to negotiate my release for asylum to Italy, and eventually I moved from Europe to the U.S. where my husband and his family lived.

My persecution and release had a powerful effect on women and others in my community in Sudan as well as Christians around the world. Wrongful imprisonment of women because of their faith is common in Sudan, but freedom after wrongful conviction is uncommon.  There is a pattern of persecution and attacks by the extremist regime in Sudan that includes the arrest of many church leaders and members, the destruction of many churches, and the false accusation of those with a Christian faith.  The Sudanese government violations of religious freedom also include less visible evidences like closing churches and church schools, restricting missionaries from entering the country, and censoring religious materials.

When the Sudanese people, and especially Sudanese women, saw the U.S. and other nations speak up boldly for my release this gave them hope that they were not overlooked and that change could happen.  They also realized they could no longer be silent about the mistreatment of people in the name of religion because they knew this could happen to them.  This boldness continues to this day.

As you know last month on June 3 in the capitol of Sudan, pro-democracy protesters were surrounded by the military of former President al-Bashir. The TMC military of al-Bashir opened fired on these freedom-loving protesters, killing 118 people and dumping 40 of their bodies into the Nile River. What many do not know is that this protest started many months earlier and was organized largely by women who had grown weary of the unique burden that a lack of religious freedom placed on them. When a woman converts to Christianity or another religion in a country such as Sudan, the first person most likely to murder or imprison her is often her own husband or father. This is because the oppression of women is tolerated and often encouraged by governments that promote religious intolerance. True FoRB sets all people free to worship and believe as they choose, including women. When we work together toward a common goal more can be accomplished.

So what can you do to prevent stories like mine from happening? First, have the courage to listen to difficult stories like mine from those suffering persecutions. Use social media to follow leaders of freedom of religion or belief. Watch videos, read articles, and get educated about what is happening in other countries. Do not look away. Second, speak up about what you have learned. Speak up on social media. Speak up in your community and places of influence.  Help those who are blind to religious persecution to see the truth. Grassroots revolutions can prevent oppression and even topple governments. Small actions can make a big difference. If you are a religious leader, human rights activist, or government official, I especially urge you to bring truths that are hidden to the light.

Thank you for this opportunity to share my story and bring hope and courage to those who have suffered because of their faith. God bless you, and God bless America. 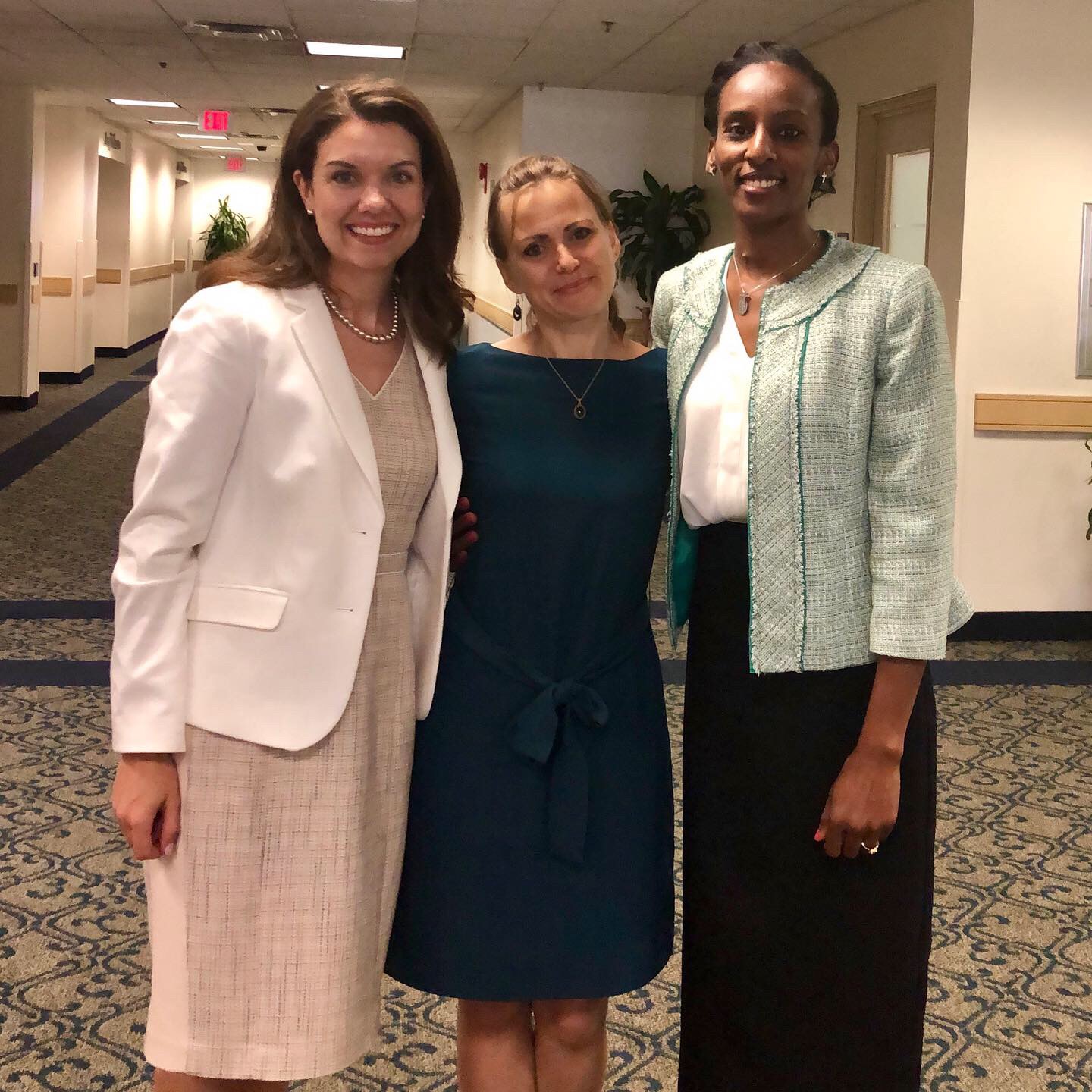 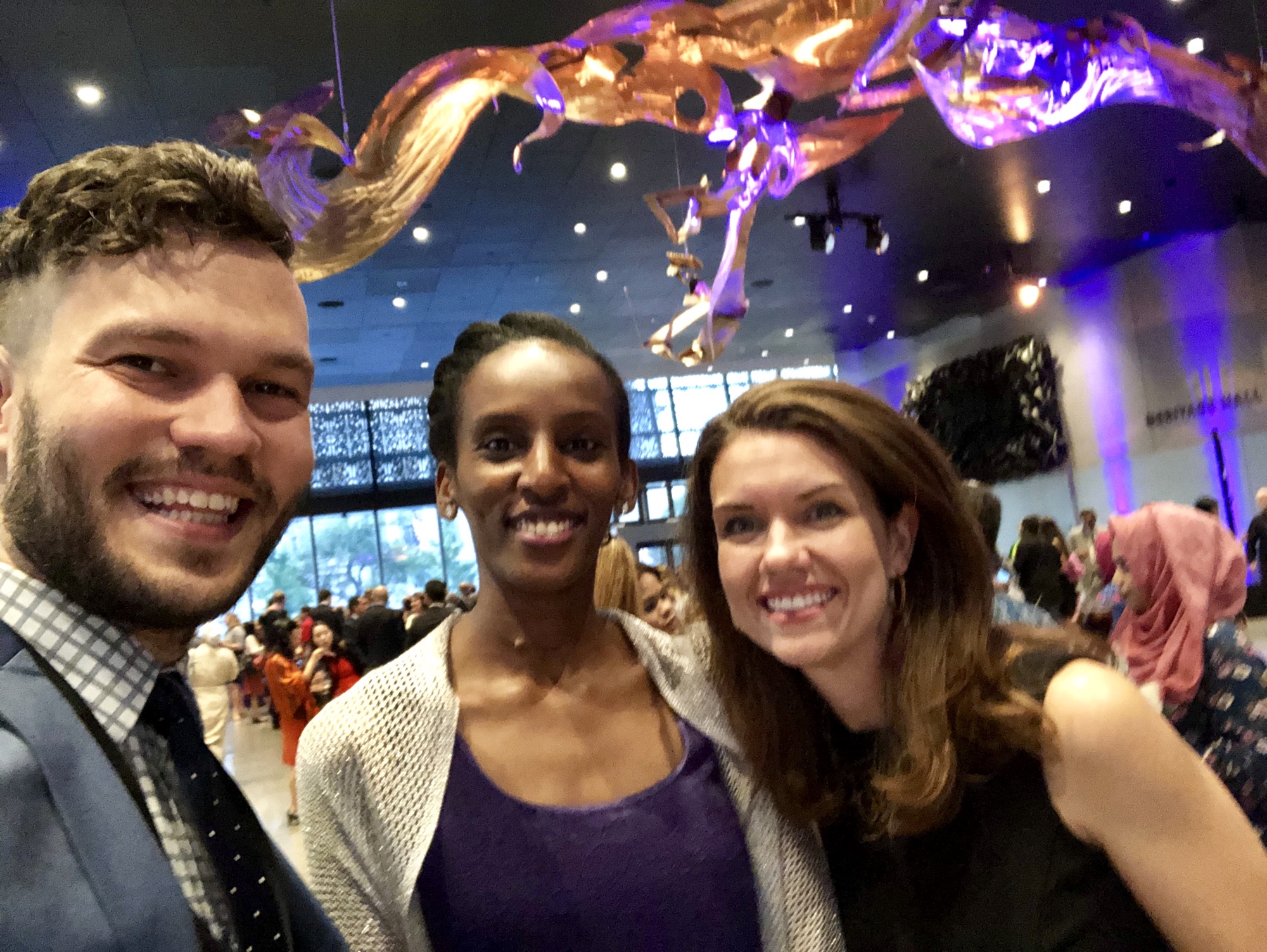 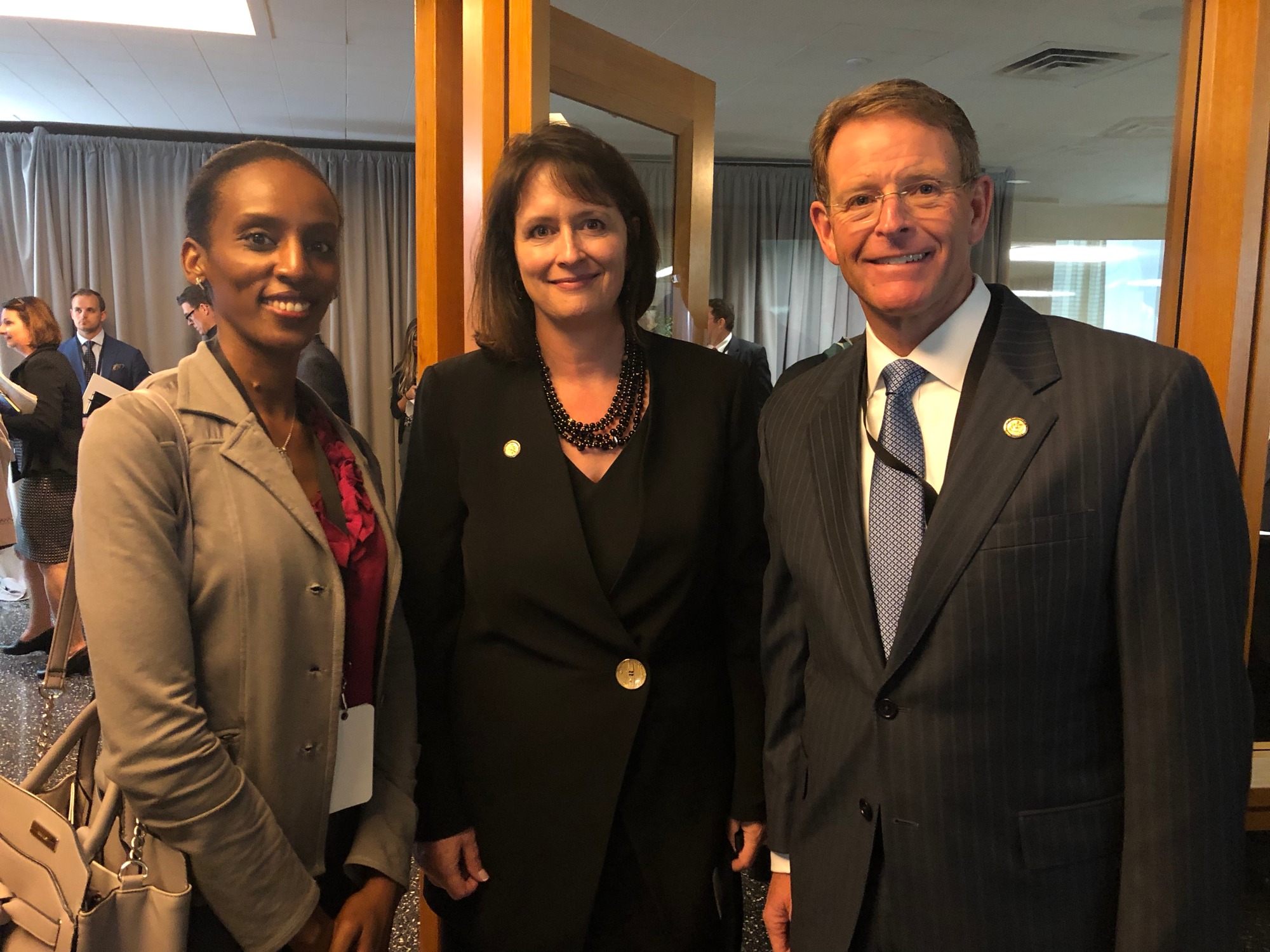 Next Post
3 Minutes That Landed Me in ISIS Territory
Previous Post
SUDAN IN CRISIS: TAF Speaks Up on Capitol Hill