We have an opportunity to serve two persecuted Christians who have suffered tremendously. Both Neda and Mariam are Christian converts who were active in house churches in Iran before they had to flee the country. The Iranian government had arrested members of their family, members of their house churches, and was close to arresting them before they escaped. They were forced to flee Iran with few personal items as they relocated to the country of Turkey. Neda and Mariam are vulnerable, with no means of being able to work or take care of themselves.

Their stories are below. Any amount helps to get Neda, Mariam, and other persecuted Christians back on their feet. Please partner with us, to act justly give boldly in support of rescuing the oppressed. You will be a part of changing their story and the lives of many more to come.

Help us support Neda and Maryam in the following ways: 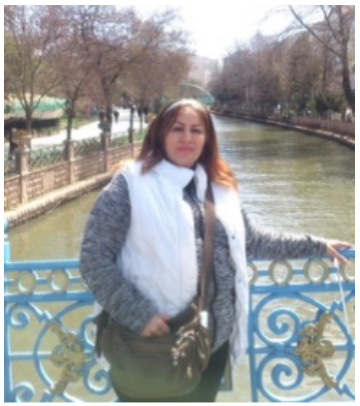 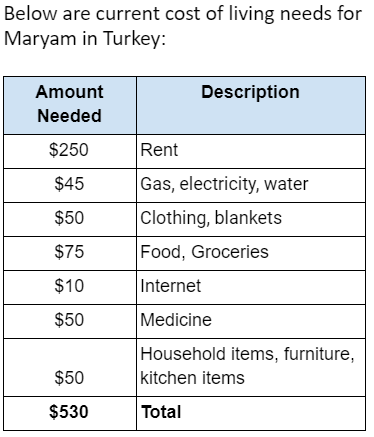 Maryam was born on February 20, 1968, into a Muslim family inside of Iran. She was forced to marry at a young age of 15 and was not allowed to finish her education. She soon gave birth to a son and a daughter and found herself trapped in an abusive marriage. Maryam’s health was quickly deteriorating from the trauma of the abuse and her life was constantly in danger. At one point her husband tried to kill her, and that is when she knew it was time to leave. As a result of leaving Maryam experienced extreme poverty and homelessness and ended up addicted to drugs including anti-depressant and anxiety drugs. One night in the depths of her darkness and desperation she cried out to God to help her and to rescue her. Soon after that prayer in 2003, Maryam was at the Iranian bazaar when two Christians approached her and shared with her about Jesus Christ. She joyfully received the message and became a follower of Christ.

It was during that time that Maryam joined the house church network that Naghmeh Panahi was a part of. She came to every meeting. She also read the Bible and prayed constantly. Within a short month, she had finished reading the entire bible. Joy and peace entered Maryam’s life, and everywhere she went she shared about Jesus. Within a year the number of believers was growing so quickly that there was a shortage of homes where the underground house churches could meet. Maryam joyfully opened her small low-income housing for believers to gather.

One night in April of 2018, Maryam was not feeling well so she did not attend a house church meeting for leaders. She later learned that the Iranian Intelligence Police had raided the house church meeting that night and arrested many of the house church leaders. She also learned that the Iranian Intelligence Police were pursuing her. The police had come to her apartment to arrest her, but she had not been there. Maryam became fearful of being arrested and was moving from house to house until after much prayer and fasting the Lord confirmed to her that it was time to leave Iran. That is when Maryam fled Iran and traveled to Turkey.

Life in Turkey has been extremely difficult for Maryam as a woman in her 50s. There are no jobs for female Iranian refugees, and no one can provide for her. She has spent winters without heat for fear of the cost and has gotten sick as a result. She also rarely showers or uses electricity for the fear of the cost. Every dollar matters. Your financial support will help Maryam with basic needs such as housing, food, utilities, and warm clothing (especially with winter approaching quickly) until TAF is able to get Maryam into a safe country where she can receive education and training to be able to work. Any amount will help and is highly appreciated. 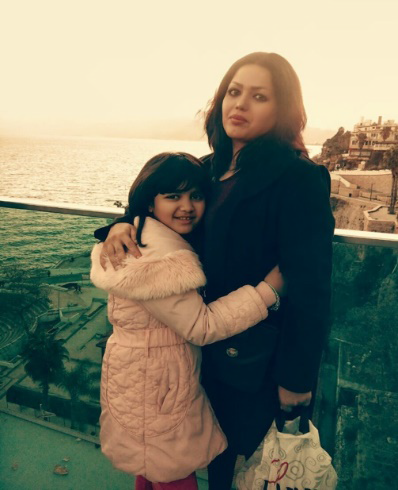 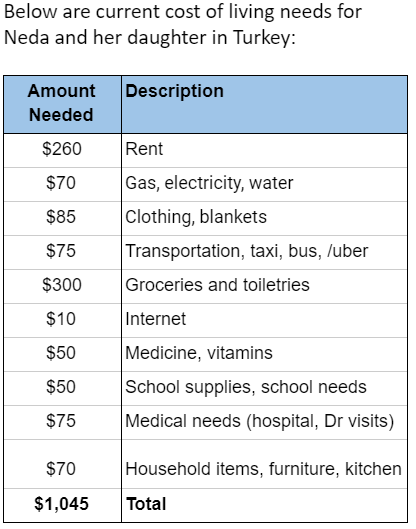 Neda was born in 1983 into a Muslim family inside of Iran. She became a follower of Christ in 2002 at the age of 19. Soon after her conversion, Neda began sharing her faith with fellow college students and many became followers of Christ as a result. Neda quickly found herself helping disciple these new believers and becoming heavily involved in the underground house churches In Iran. As the number of house church members were growing, Neda was experiencing her own personal tragedy when her husband, who was addicted to drugs, abandoned her and her daughter soon after their daughter was born. In 2008 Neda found herself in much poverty as a single mother. Neda experienced being homeless for a season until through the help of some friends she was able to find low-income housing for her and her daughter. God used this trying time in Neda’s life to reach many women and children in her low-income neighborhood. There was much fruit but with fruit came much persecution. By 2018 Neda, her mother, and her sisters were ministering to hundreds of women in the underground house churches inside of Iran. Neda’s sister, Anita, was arrested in March 2019 and taken to solitary confinement. (Anita is currently under house arrest and awaiting her trial). Consequently, Neda was also wanted by the Iranian intelligence police due to her involvement in house churches with Anita. The Iranian government considers Christianity the number one threat to their national security. Due to threats of arrest and imprisonment, Neda took her daughter and fled to the country of Turkey where they currently reside.

Unfortunately, once in Turkey, Neda’s daughter became very ill and almost died due to unsanitary living situations as refugees in Turkey. TAF was able to help them get an apartment where it was safe and sanitary for Neda and her daughter.

Your financial support will help Neda and her daughter to continue to live in a safe and sanitary environment and get medical help, essential household items, and help pay for utilities and warm clothing especially with winter approaching. Any amount will help and is highly appreciated.